There was a great buzz on the afternoon of December 13th for the closing day/presentation of all the Dogs’ Tales (see Dogs’ Tales Page). 38 prints in all were on show in the Kiosk with the public and participants all invited. A mildly chaotic feel to the proceedings was provided by the presence of a number of our canine subjects, some saying hello for the first time.

For the cold but bright afternoon we had some delicious mulled wine from ‘Canteen’ in Limerick. As is customary, I did have a few words of thanks for all involved, with a comic ‘dog-related’ pun theme. Sincere thanks to the participants, my new four legged friends, Limerick City of Culture, and all who took the time to engage with the project. 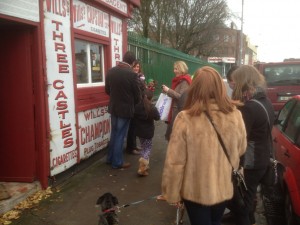 To mark Contact Studios 17th year we invited previous members to exhibit work alongside our current members. The Studios were cleared and cleaned and presented as a gallery space.

26 Alumni along with our current 14 members partook, and there was a great crossover of the Contact Generations. There was a great response to the show, and hopefully this network will grow and consolidate over time. 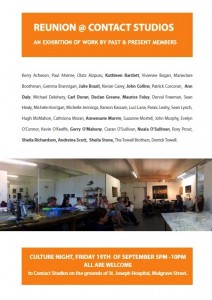 On the night I exhibited a 2x2ft (60x60cm) work which forms part of Skippy’s Tale. It’s a tonal piece, depicting a moment when 3 of Skippy’s kittens observe a snowy landscape for the first time, and contemplate venturing out into it. The collage will form part of the illustrated aspect of a book, which will be the second after Mathilda’s Tale (of which more in the short term).

Limerick School of Art & Design host current students and Alumni June 7th weekend. As part of this celebration Luggage doors Operating, a composite band of a patchwork of Limerick Studios will present music to this arty audience.

There was a great attendance over two open nights for the show, thousands have already seen it. Delighted to be in such good company, and a prime hanging space.

I bade adieu to Dublin’s Fair City with a heavy heart.

This chapter, a 3 x3 ft (90 x 90 cm) oil painting will be displayed as part of the RHA Summer show in Dublin, commencing May 27th, public Opening May 26th. She’s pictured here all ready to depart in Normoyle & Frawley’s Gallery and Framing, who did a great job as usual. My thanks to Gary Coyle for facilitating my participation in this prestigious event. My thanks also to my Artist friend Seán Healy (in advance) for his hosting and critical skills.

Continuing on the theme of Cats’ Tales (see Cats’ Tales Page and March 2013 post), this painting imagines Cáit wandering around Monilea by Moonlight. Monilea, a rural area in Co. Westmeath is where I spent many of my teenage years, and was the subject of many Landscapes I painted. It seemed apt to combine the two subjects, both lost times, existing in a half-remembered, dream-like area of my consciousness. 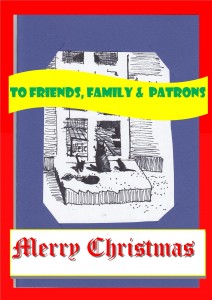 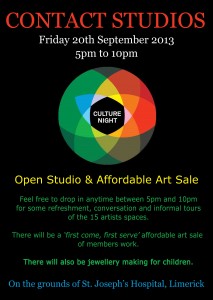 For Culture Night my studio (along with my co-Contact Studioers)  opened to the public, and slightly tidied up for safe public access. On view and in process at the moment were some ‘Seasonal Variations’ paintings on the ground, along with a few finished pieces, and a preview of ‘Mathilda’s Tale’. ‘Mathilda’s Tale’ is predominantly a series of fine pen sketches concerning a step-sister of Mindy&Mandy (see Cats’ Tales post below), and concerns the ongoing tensions between an Askeaton (Co. Limerick) Blackbird, and a Thomondgate Cat. Ourselves and our 300 or so guests had a great night, with much-needed funds raised through ourPostcard&Affordable Art Sale, and as always, some photo’s from the night will follow. 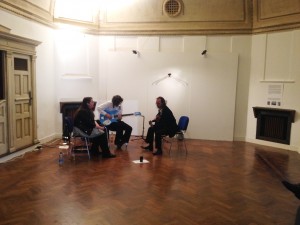 Also, as part of (Faber Studios) Kevin O’Keefe’s project in the Bellwether show in the Church Gallery, Clare St., Limerick, myself and Pamela Dunne from the Limerick Printmakers  played some music inspired by the spirit of Limerick inter-studio cooperation – and an upholstered electric guitar between 6pm and 7.30pm. It is possible to be in 2 places at once!! 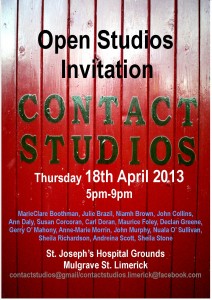 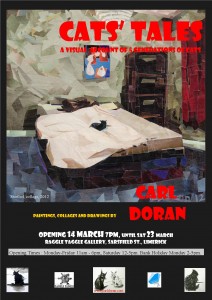 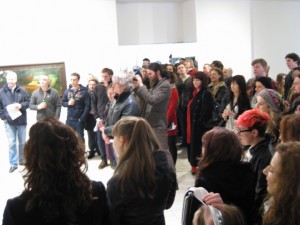 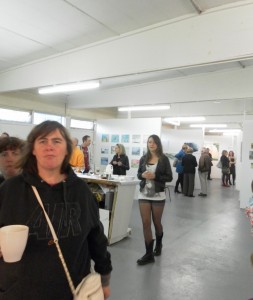 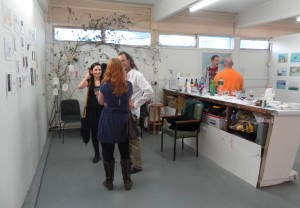 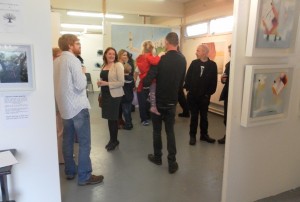 I displayed 9 previously unexhibited works from my Seasonal Variations Painting series, as part of the national Culture Night event. Each of the 14 Artist spaces were installed as solo exhibitions, the Studios cleared, painted, scrubbed, with visitors welcomed from 5-10pm with open arms.

It eclipsed our previous visitor number high for Keeping Contact (overview of 12 years of Contact Studios with over 40 artists) which had 200-250 attendees, with 350-400 visitors estimated.

There was a great reception for the works and I had a great chat about the processes and the artistic life with the visitors, all over some nice wines, beers and soft drinks. Thanks to the Arts Council, Limerick Arts Office and all involved.